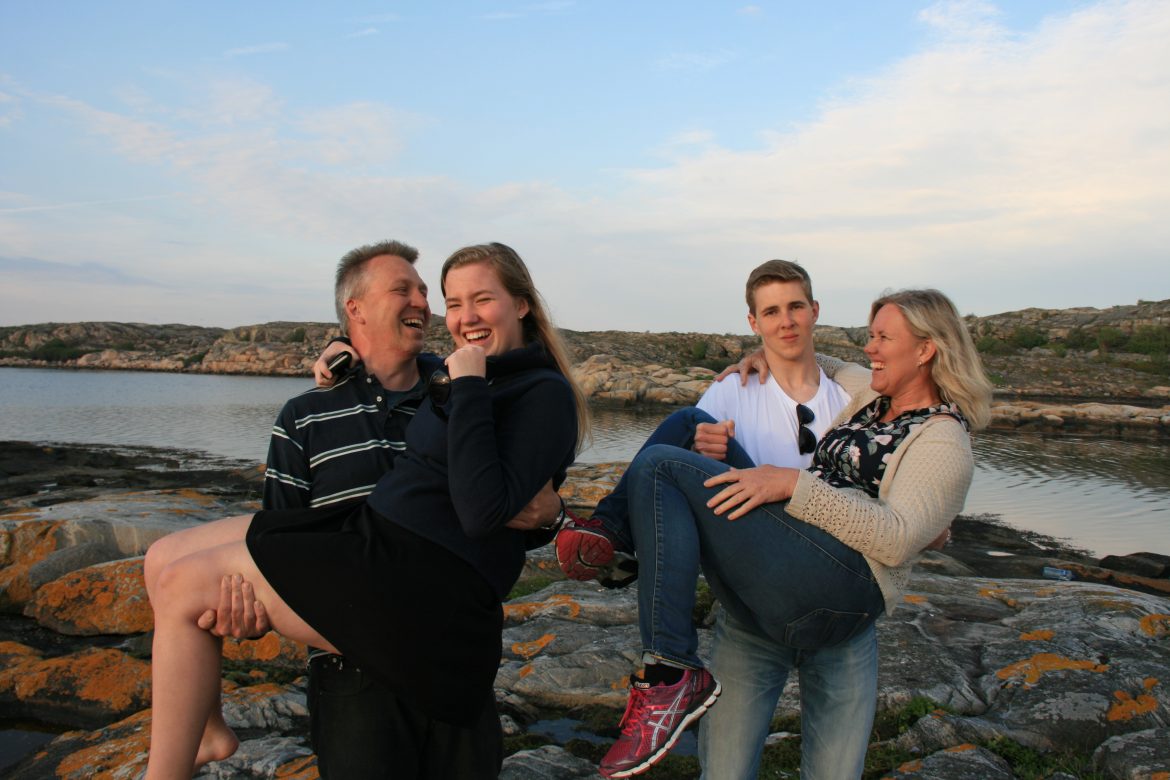 Since you ended up on this page you’re probably not family. You might be a curious old friend or someone we haven’t met jet. I guess all you want to know is a little bit more about us.
My name is Malin, I am married to Joel and the mother to two teenagers, almost 15 and 18 years old. This is our story of how it all began.

To start, we have to go back about 14 years. Before that I would not call myself a dreamer nor an adventurer.  We lived an ordinary, conventional family life in a newly renovated house on the island of Smögen on the West coast of Sweden. We had two beautiful little children, a boy and a girl, and had full time jobs we both enjoyed (me as a teacher and Joel as an engineer). We had an easy life and everything was pleasant but as it turned out something was missing. Specially Joel felt the lack of something in his life. When he revealed to me that he had no desire to live in one house with one job for the rest of his life, it felt like a bomb had hit me. I just had a hard time to understand what had gone so wrong.

Our first adventure as a family begun, when we three months later, moved to an exotic village in the Norwegian alps called Stranda. This is the village where Grandiosa, The frozen pizza, is made. And yes, there you have the reason why our boat is named Grandiosa. 🙂 We had an absolutely wonderful time living with a view over the fjord, tracking in the alps, skiing and finding out what marine creatures lived on a depth of 600 meters. We also lived a comfortable life but after three years it was time for a change. This time we were going to sail to Africa and this time I didn’t hesitate for a moment even though I had never been on a sailboat before.

Our first sailboat,  named Grandiosa, took us on our second adventure from Smögen to Guinea Bissau during the summer/fall/winter of 2007. For you who don’t know, Guinea Bissau is a country in West Africa with a population of about 1.7 million.  What made this destination so very special to us was that Joel had lived a year on the island of Bubaque in the archipelago of Bijagós together with his parents and younger sister Jennifer. A place our family just had to visit and the best way to visit these islands is of course by boat. This adventure is well documented for everyone who happens to be fluent in Swedish (Here) and for the rest of you… Google translate is great tool. 🙂 Our first sail adventure ended with a small wedding on the Canary Islands so I could obtain a work permit for… our next adventure, the USA.

After a short visit to our home in Sweden, we packed six suitcases with our

“can’t-live-without-things” and moved to Delhi, Louisiana. Our Children, being born in Sweden and not being able to speak any English, turned out to be a real challenge for the school. After some wearisome meetings with the principal, the school finally agrees on giving our children a chance. We think it turned out to be a good choice, and both our children could move back after three years with excellent grades, a box full of rewards including TO’s Student of the year trophy. We also received friends-for-life, who we cherish very much and hope to see within the next year.

We moved back to Sweden a cold and dark November day in 2010. The decision to move back was based upon a belief that our children needed to learn Swedish properly and get to know their grandparents and family a little better. Joel traveled weekly back and forth from his work for Orkla in Norway, I started my own business selling organic corporate clothing and the children started school. The meaning of adventures has maybe been modified a bit but up til today we have both been running our own businesses and that can be quiet adventurous as well.

Our children will graduate from their schools in June and we are very proud over them both. Since we left our first sailboat on the Canaries Island ten years ago, our family have never stopped dreaming about going on another adventure and this is our time!

So now you know a little bit more about us. Come join us as we set sail!